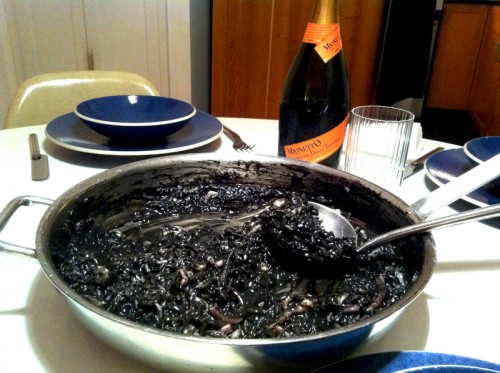 Few things suck less than cooking with my friend Luca, with whom I got up to all sorts of no good when we were twelve, and didn’t need Facebook and its almost disorienting re-ranking of friendships past to keep in touch. Let’s be honest. There’s a reason for the attrition of friendships over a lifetime, and as much as we would all love to explore the ones that Mark Zuckerberg has had a hand in rekindling, who has the time?

So I’m sticking to my (new) old ways: Call (Skype) a school friend you still relate to. Catch up. Make a date when and if you’re in the same city. Hang out.

Which in the case of Luca translates to absurd nicknames, mutual verbal abuse (which, trust me, Luca fully deserves), and endless cutting-each-other-no-slack as we trawl Brooklyn Heights for ingredients—Fish Tales for branzini, squid, and its fresh ink; Damascus Bakery for what may be the best homus and pita bread in North America; Heights Chateau for Prosecco (alright, already, I get the point, Manhattan pales by comparison)—schlep all that upstairs, crack open the first bottle of Prosecco, and start chopping. 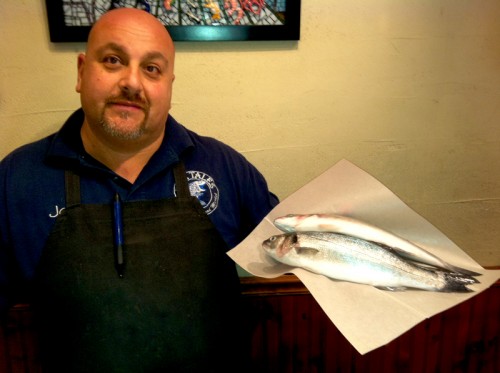 Meanwhile I’m trying to write a blog here, and Luca not only doesn’t let me measure (which I happen to agree with if it’s just for me, but how the hell am I supposed to explain to you what to do), he refuses to document with anything other than his “five-megapixel” iPhone, even though he has a camera that costs more than a fur coat and is highly trained to use it. He says my lens is a piece of shit and doesn’t even offer to buy me a new one. What kind of a friend is that?

Then he tells his daughter we’re all family. As if.

And then, get this, he has the nerve to wax poetic on the invisibility of ingredients, and how they build a dish rather than overpower it, as though I’m some novice just because I spilled a little too much tomato sauce into the risotto.

At least he listens to me when I tell him to take a picture of the god-damned branzini he stuffed with garlic and fresh thyme from his rooftop before we lose the light. 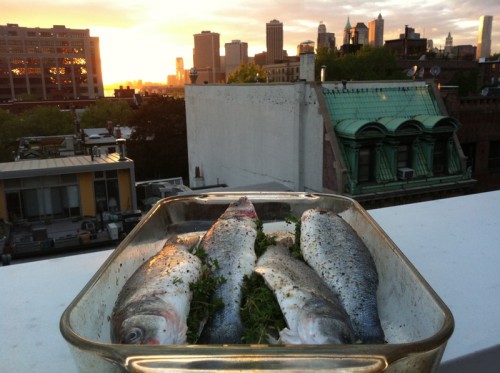 But it still got worse. He didn’t hide his opinion of the red wine vinegar I made him buy, and would you believe that when I grabbed one of the Sitram skillets to mellow its acidity he rubbed it in my face that he only paid a hundred dollars at the 26th Street flea market for his ten-piece collection, knowing full well I shelled out more than that just for one Sitram rondeau. I showed him though, reducing the vinegar with Prosecco, freshly squeezed grapefruit, and a sprinkle of raw sugar, and whisking in olive oil for an endive salad that he ended up polishing off, not me.

So how was dinner? Late. These Italians, they eat at like eleven. I mean I don’t know why I even bother with Luca. All we share is a city, and an eighth-grade Social Studies teacher with a funny accent, and hours in the school den listening to Sticky Fingers, and long days at the Central Park Bandshell that stretched to longer nights at Studio 54, and stories of college and time in California, and the birth of our children, and our marriages, and the end of his, and my move to an island really far away. I don’t know how to measure all these ingredients, but they sure add up to something.

HERE’S WHAT YOU NEED (for 4 starter servings, or 2-3 larger servings):

Heat 2 tablespoons of the butter along with the olive oil over medium-low heat in a large, heavy-gauge skillet. Add the onions and cook and stir until soft and translucent. You can add a little salt to coax the moisture out of the onions, and a tiny amount of stock to hasten their softening, but don’t add the rice until the liquid evaporates, and do not brown the onions.

Stir in the rice and cook and stir until slightly toasted, about 2-3 minutes. Stir in the tomato sauce until the rice is evenly coated.

Add the liquids (Prosecco, fish stock, and squid ink) into the rice about 1/2 cup at a time, beginning with the Prosecco, followed by the hot fish stock, and finally the squid ink. Stir continuously after each addition until the rice has absorbed the liquid. When the rice is creamy and almost soft to the bite, raise the heat slightly, add the squid, and cook and stir for about 2 minutes until the natural liquid from the squid is absorbed and the squid is cooked, yet still tender. Turn off the heat and stir in a few teaspoons of butter until melted, then season to taste and serve immediately.

We ate this as a primi piatti, followed by baked branzini stuffed with thyme and garlic and rubbed with olive oil, broiled asparagus, and the endive salad described above. And we finished two bottles of Prosecco, but most of that was Luca, naturally.