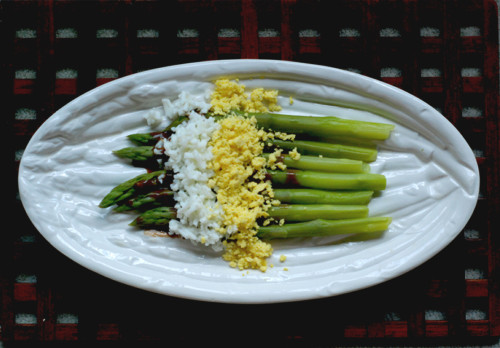 I was a sous-chef at six, at the James Beard House no less. Don’t believe me? That’s because you haven’t met my mother. As one of Mr. Beard’s cooking school graduates, she deployed what she learned from the culinary giant to transform our tiny townhouse kitchen into a battlefield canteen, and conscripted my sister and me as soldiers in her years-long campaign to outperform every dinner and party hostess in Manhattan. While you were watching Gilligan’s Island, I was tearing from peeling onions, or dressing an oven burn. While your parents were prattling to their friends about your precocious choice of kidneys off a French menu, my mother was persuading Oscar, our reluctant Madison Avenue butcher, to order the succulent morsel of lamb that we would wield to floor a visiting London gourmet. No, we didn’t cook him the brain, or some gland. We fed him the fetus.

Too young, and frankly too busy whisking roux to ponder the source of mom’s culinary obsession, I must have realized it did not spring from my grandmother, a busy fashion executive who had four husbands, four martinis with lunch, and two not-so-bad recipes: fettuccine with canned clams, and baked chicken. She also had ambitions for her one daughter, chief among them landing a well-bred husband, which Mom accomplished by graduating from Smith and marrying the grandson of the former chief justice. What Dad never could have conceived was his new bride’s inner battle cry when he casually mentioned how his former wife had been a lackluster cook. The next dozen years’ worth of recipes, which I remember my mother continually pasting or typing onto small pages now brown and brittle like phyllo, tell you how far into a man’s stomach a woman will reach to win his heart. 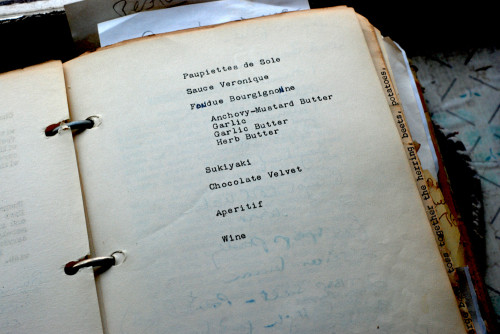 A few years into their marriage, more motive. Stultified by his job in finance, dad fled Wall Street in pursuit of a more fulfilling life as an art dealer, which required groundwork in Europe: him on artists and art, and mom, kind of accidentally, on cuisine that would lure would-be collectors to our dining table. They boarded Le France with my four-year old sister, sailed to Calais, bought a Citroen and a beret for Dad, and spent most of 1962 visiting museums while laying the groundwork for a career in the gallery world. During the romantic trans-Atlantic crossing, Mom and Dad also managed the earthly duty that made me, so this eight-month sojourn on the Continent became Mom’s chance to put on fifty-five pounds, and mine to gestate in cheese.

I was a drooling infant, and therefore temporarily off the hook, when the gallery’s calendar, coupled with the social engagements that came hand in hand with my parents’ significant efforts to promote racial equality, got into gear. I’m guessing it never occurred to Mom that if she and her children were going to keep up with the demand of sit-down dinners, and standing cocktail party fundraisers, and buffets for up to 200 gallery-opening guests, she might want to hire some professionals. Her solution, instead, was to just speed it up, and that’s where James Beard comes into the story. 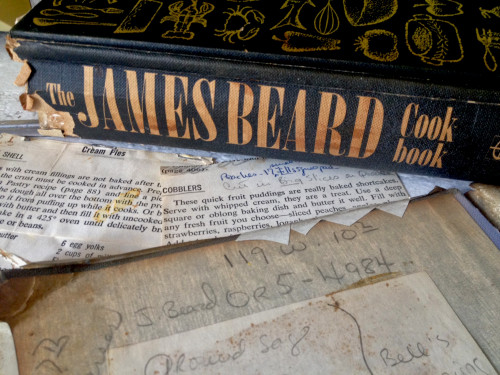 Though not yet the towering legend he is today, James Beard was a well-known cookbook author when my father presented mom with a gift of weekly cooking classes at the chef’s small brownstone on West Tenth Street, a few blocks from his later residence now enshrined as the seat of the James Beard Foundation. For Mom, whose copy of The James Beard Cookbook was stained and dog-eared from repeated use, James Beard the man was the Holy Grail. Armed with his tricks, and daughters who could do mise-en-place, no mountain of asparagus was too high. We snapped and peeled thousands of those suckers to serve our dinner guests Mr. Beard’s impeccable Asperges Vinaigrettes.

Word of fine food spread like jam, and even strangers at gallery openings approached Mom begging for an invitation to one of her parties. We started buying potatoes wholesale, in sacks, and peeled them until we had sores. Friday nights we portioned and froze the quantities of meat that Mom, inspired by Mr. Beard’s example of supporting independent purveyors, sourced direct from a wholesaler on Ninth Avenue. During her Greek-food phase, we brushed melted butter onto sheet after sheet of phyllo that we then cut into strips, filled with bite-size dollops of spinach and feta filling, and folded into triangular spanakopitas which guests, oblivious to the child labor involved in producing them, devoured by the tray-full. I would know. I was the squirt who ferried the trays through a sea of knees to reach the insatiate revelers furthest from the kitchen, which, I learned early, is a stupid place to stand if you love food.

In our sixty square feet of urban kitchen, high volume was never a deterrent, as Mom’s idea of a bake sale demonstrated: three full days for us to execute her one-thousand-cookie pledge for a Merce Cunningham benefit (I counted a thousand and four). High profile guests didn’t intimidate her either. I had no idea who these people who made me miss my favorite TV shows were, but apparently we were cooking for UN delegates, art collectors, food critics, opera stars, and chefs, many of whom I greeted in my pajamas. What did frighten Mom, like a pathology, was disappointing her guests. What frightened me were the tirades intended to ensure that would never happen. Among the hundreds I inspired, I distinctly recall a Gordon Ramseyesque, where-is-your-common-sense rant after I misread the recipe for a deliciously aromatic Beef Bourguignon we were preparing for a small party, and added two tbsp, not two tsp of salt.

Second in importance to preparing food that tasted better than anyone else’s was not wasting it, which explained Mom’s rigor with a rubber spatula. There were all these starving kids in India I was damn lucky not to be, so I caringly submitted to her exhortations and scraped our mixing bowls so clean they could almost be put right back in the cupboard. Eking out those few extra bites allayed yet another of Mom’s fears, which was leaving any guest wanting; but it also stank because one of the points of cooking, for a kid at least, is licking the bowl. When Mom wasn’t looking, I didn’t care if it could make me sick. I sopped, spooned, scooped, or wiped up with my index finger, every raw mix I could get my hands on, even meatloaf.

Speaking of meat, some of the admittedly delicious dishes we prepared were really gross, like that unborn lamb (headless, thank God), and braised whole cow’s tongue, which no matter how or where you sliced it sent a shudder down your spine. Or how about the aged batches of truly medieval minced meat for our Christmas pies adapted from Mr. Beard’s recipe in Delights and Prejudices. Unlike the jars of fruit-only mince filling at Shopwell that my sister and I surveyed in an attempt to prove to Mom we were making a grave error, her pie filling contained actual brisket, tongue, and gobs of raw kidney suet that would all sit in a ceramic jar on our kitchen counter for a full two years before we ate it. Mom was correct that three bottles of booze guaranteed the mince would be safe to consume. But you can either look at the post-Christmas-feast photos of us with bloodshot eyes, or just take my word for it: an hour in the oven at three-fifty does not burn off the alcohol.

Needless to say, my dinner stories in few ways matched those of my classmates, and bizarre, embarrassing leftovers frequently crept into my lunchbox. They tasted good, even great, at home, but I couldn’t seem to convince Mom that pulling out cow tongue and Tallegio on bread with holes in it was a fourth-grader’s version of social suicide. These exotic remainders haunted me for years, and more often than not they met their demise in a municipal trash can on Fifth Avenue, where the biggest fear of my childhood wasn’t getting mugged, but rather my mother, for lord-knows-what reason, peering into that garbage can and discovering the fate of her food. 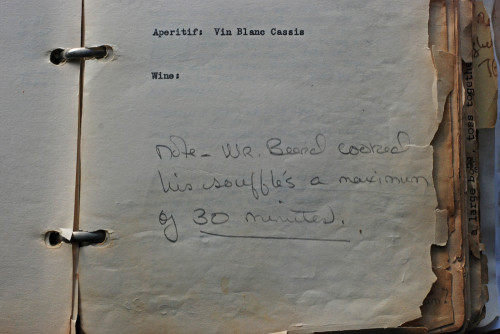 Was the outcome worth all this effort and grief? You bet. While my friends were lucky if they got a Stouffer’s frozen spinach soufflé, we handcrafted Mr. Beard’s multiple variations on a soufflé theme two or three times a week. Hence no letup on roux, nor on meticulously separating egg yolks from whites. But once those tasks were completed, you better believe I fought for my turn to whisk the whites, transforming them from mucus into a cloud-like foam. It was as though I had a magic wand in my hands. The fluff clung just enough to the interior of the bowl to not dump out when I triumphantly suspended it upside-down over my head. This nifty trick never failed to subdue the pressure we all felt in the kitchen. Mom would actually stop what she was doing, look over, and swoon with delight at me, the kid who was not only one helluva cook, but who could tame gravity too.

That was always a really good five seconds, and then it was back to work.