As it turned out I was let off this afterbirth hook by the gods almighty because what constituted bio waste, or organ meat, to this parent, was a sacred spirit to the father of her child. Eating our daughter’s placenta, my horrified husband explained to me, was tantamount to eating her guardian sibling, the one who was watching over her in utero, and the one who, interred along with religious offerings about four feet deep in the earth, would watch over her throughout her lifetime. 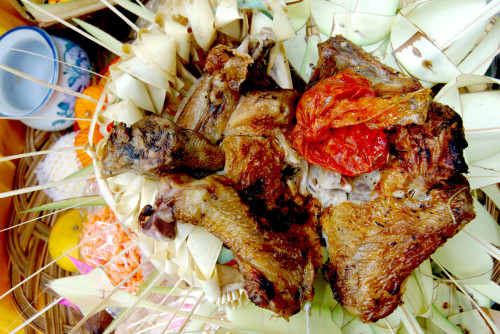 So our real dilemma became where on Earth to bury it? As renters with no yard and no roots in the foggy city, we agreed that the placenta belonged in one of the family properties in Bali, where we would soon be moving. There it would be fed offerings, and would ground our firstborn in her ancestral land. That to pull this off would entail crossing international borders with a bio hazard in our luggage was of course discussed, but it posed less of a problem than you would expect given 1) we were living in the relaxed pre-9/11 world, and 2) the actual border we would be crossing was Indonesia’s, where the customs officials were conveniently on the take.

My questions, now that I had gladly dismissed the notion of consuming my child’s organ-ish sibling, were ickier in nature. What were we going to do with it once it emerged from my body, and did I have to touch it? The answers lay on Stockton Street in the heart of San Francisco’s Chinatown, where my husband and I traveled, with some urgency, on my first of three days in natural labor in order to procure some holy cloth (anything white), a glue gun, and a decorative glazed ceramic pot with a lid. Yup, we were going to store it. At room temperature.

This was January. Come late summer, when daddy was able to take his first trip home to Bali since our delicious baby girl had arrived, he relieved the kitschy reliquary from its vigil under the table by our front door, swathed it first in bubble wrap, then, more presciently, in several outdoor-strength Hefty bags, and then immobilized the sacred bundle in among his clothing in the center of our largest suitcase.

Since I had never actually seen the remarkable pound of flesh my body had produced—I was so altogether love-struck by the seven-pound cutie pie that popped out first, I forgot about it as quickly as I forgot the fifty-five hour labor—the contents of the jar were an abstraction. As I watched my husband pack, I wasn’t considering the physics of sealed decomposition gases at thirty-nine thousand feet. It says everything about the place of religion and ceremony in Bali that the Balinese official inspecting the bag didn’t flinch, didn’t ask for a bribe, and eagerly permitted the rotting, dripping mess to enter the country so it could make the last leg of its long journey home.

And after ten years of boarding schooling, college, and work in the US, that’s where the daughter has returned as a young adult, umbilically tethered as she is by her little underground sibling, by childhood memory, and by the love of the huge extended family that lured us back from San Francisco in the first place. 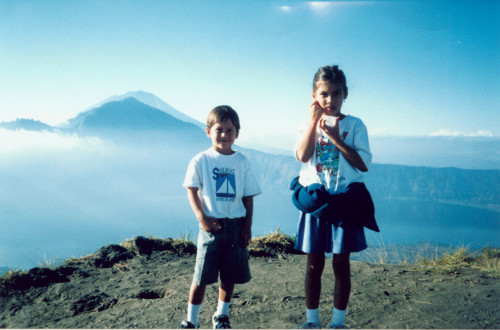 Who’s to say if her brother (the actual one, born in my mother’s guest bathtub in New York City two years later) will follow. I couldn’t ask my mom to store his guardian organ indefinitely in her freezer, and we might have been arrested had we attempted to carry it through quarantine-happy Australia, our transit point on our way back to Bali. So we don’t know where his afterbirth brother went. Before leaving New York, we wrapped him with some spring wildflowers inside of a white cloth, drove him to Riverdale, said a prayer, and last we saw of him he was hurling through the air and about to plunge into the flow of the mighty Hudson River.

Last I saw of my adult son was a few weeks ago in Istanbul, on the banks of the Bosporus Strait. Untethered as his dad had predicted he might be, it was the twelfth country he had visited in as many months. As we rode the city ferry from Europe to Asia for a repeat of the outstanding Muhammara we had eaten the night before, I was wondering: could it be, and I mean, could it actually be, that some particle of that parcel we cast into the Hudson had drifted all the way to the Bosporus, and another particle to the Chao Praya, another to the fjords of Norway, and still another to the Thames and beyond? I’ll never know, but I believe my son will spend a lifetime of splendid adventure finding out. 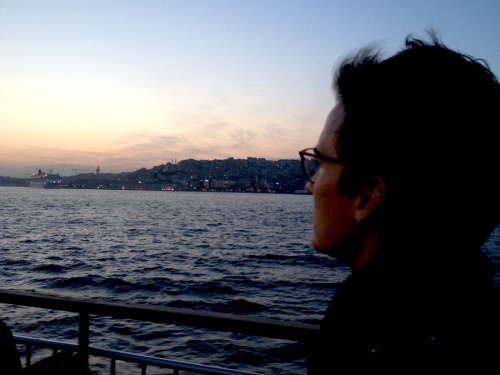 Thank you to Ciya in Kadikoy, Istanbul for the great muhammara, and to Dock Kitchen on the Regent’s Canal in London for the spectacular flatbread shown above. Both establishments will elevate your own spectacular adventure.

HERE’S WHAT TO DO: (NOTE: If you are making your own red pepper paste (do it!), then add about 8 more red bell peppers to the oven, and use the great instructions on deliciousistanbul.com.)

Preheat oven to 400° F / 200°C. Place red bell peppers on a small baking tray lined with parchment paper, and place in the oven for 45 minutes, turning once or twice to make sure all sides develop a slight char. When done, remove from oven and cover with foil to allow to steam in their own heat. Once cool enough to handle, peel and seed the peppers, and process the flesh in a food processor or blender until you have a smooth roasted red pepper puree. Discard the skin and seeds. Set the puree aside.

In a large mortar, grind the coriander, cumin, pepper flakes and mint into fine powder, then grind in the garlic until you have a paste. Squeeze the bread dry, grind into the spice paste, then grind in the toasted walnuts and when the whole mixture forms a semi-smooth paste, grind in the olive oil until it is evenly blended in.