So how was your Sunday? 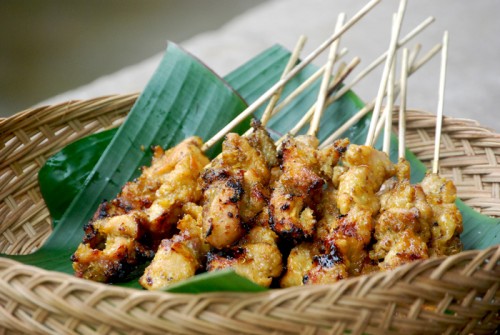 The only slightly unusual thing about mine was how not unusual it was… by Bali standards. You know, praying in a cardinal Hindu temple, a visit from a Brahminic motorcross gang, a sale of a Philippine fighting cock, a hands-on lesson in making street-style satay, a delivery from a reformed-cow-thief-turned-wild-honey hunter (who has buried the spellbinding belt that renders him invisible), and a reading from three colluding Javanese paranormals (one of whom—and this worries me, people—is a judge) who arrived with an in-law and whom it took us about two minutes to discern were quacks, and two hours to get rid of. The whole day had the rhythm of a Balinese Huckleberry Finn, only we didn’t have to raft down a river, and there weren’t any inbreds in a feud.

The night before, my husband Gusky and I had convoyed up to our “country house” (nothing fancy, it’s a former cow shed) north of Ubud, planning to imbibe some Bali spellbinding of our own with a late-night worship at the Gunung Raung temple. It was the climax of one of those month-long, once-every-three-centuries blowout ceremonies that flout anything and everything you read about Bali being “over.” Let me tell you that ceremonial life in Bali is so not over that thousands of other Balinese families shared our idea, and it was all we could do to crawl up the clogged mountain lanes and make it home, by which time it was after midnight and we had no energy left to take a cold-water outdoor bath, get dolled up, and tackle the traffic all over again.

But if there’s one thing you don’t want to do in Bali, it’s invite calamity by saying you’re going to go to temple, and then backing out. So early Sunday morning we headed down the hill to Gunung Raung and to say thanks for the many blessings we have.

I can be pretty blasé about floral and fruit religious offerings, yet this time the Balinese had crafted harvest effigies so aesthetically astonishing that while the mangku led a group of us in Sanskrit prayer, I kinda missed the spiritual point because I couldn’t stop dwelling on the fact I hadn’t brought a camera. So when we got home, instead of getting to work with a street-stall satay vendor whom Gusky had somehow persuaded into abandoning his sidewalk post and sharing the secrets of his trade, I grabbed my Nikon and drove back to the temple. 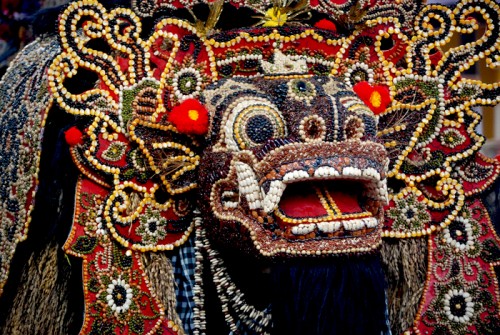 The five kilos of raw pork, tuna, and chicken I came home to an hour later were the first indication that Gusky had clearly put the word out about the satay. We weren’t just in for lessons. He was shooting for a feast and we went to work grinding a spice paste. 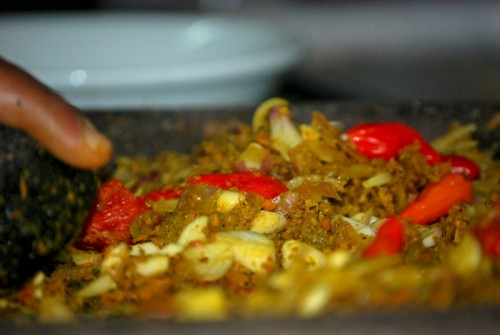 The first arrival was Gusky’s brother and eight of their friends and relatives, all clad in padded Power Ranger gear, who roared up our dirt driveway on motorcross bikes, followed by a handful of our chefs and assorted staff, then buyers for one of my brother-in-law’s gladiator roosters he raises down the road, and then some farm hands with bundles of wild fern tips they had just gathered in the forest. There was so much food we offered some to the Kak Dayuh, the honey hunter whom we pay to purloin the nectar of bees rather than the cows in neighboring villages.

We even fed the soothsaying charlatans, thinking it would shut them up, but they persisted in their guesswork even on full stomachs, and smoked so many cheap cigarettes that I felt like I’d been in a grimy nightclub once they finally took their leave.

HERE’S WHAT YOU NEED (for a group of friends, because who wants to eat satay all alone?):

For the spice paste:

Place the paste in a bowl with the chicken or pork, add the melted palm sugar, coconut oil, and salt, and massage the meat with the open palm of your hand for a few minutes to work the paste into the meat. Allow to marinate for at least two hours.

Before you are ready to skewer the meat, soak about 60 thin wooden skewers in water for 30 minutes. This will help prevent the skewers from burning.  Thread 3 or 4 pieces of meat onto each skewer. Grill over a very hot gas or charcoal grill until sizzling on all sides. If your heat is not enough, the meat will be seared on the outside and still tender inside.