You know you’ve arrived in the world of food when you’re getting paid to eat. 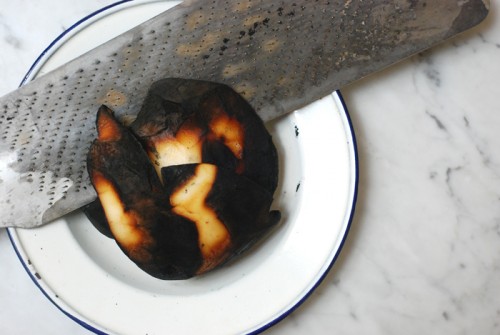 The phone call came late on a Monday night. One of the judges for a national cooking contest held in Nusa Dua, Bali had just dropped out, and a sub was needed—in the morning. Who would say no to that? Not me, even if I had just downed a good-sized dinner. I consented, and resolved to get up early, skip breakfast, and go running so I would arrive at the southern tip of the island a few shades shy of ravenous. 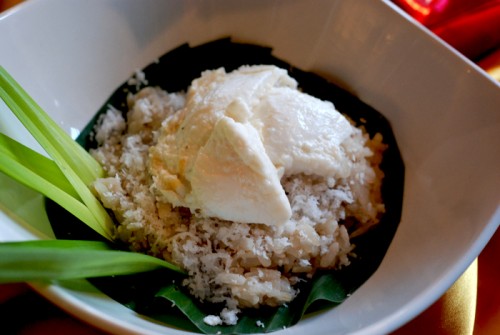 My appetite development plan worked. It wouldn’t have mattered what the first people fed me; I was so hungry anything could have garnered high marks. As it happened, Ampian Dadiah, the Sumatran buffalo milk version of burrata that greeted me at the entrance—fermented in the intermode chamber of a fresh bamboo cutting, then draped like a velvet dress over an Indonesian Rice Krispy-ish bowl of sticky rice and drizzled with palm syrup—stood out as one of the most delicious breakfasts I’ve ever eaten. If I hadn’t been contracted to move on, I would have pulled up a chair, downed a few bowls, and called it a day.

Instead, my fellow judges and I—two chefs, a high profile Jakarta restaurateur, and a TV food celeb—roamed the airy makeshift bamboo pavilion for the next two cripplingly hot hours, clipboards in hand, the paparazzi in a swarm. Our instructions were to rank, on a scale of one to ten, at least three savory dishes, one pastry, and one beverage from each of the fourteen competing provinces, so you do the math. The chefs, mostly women ramping up the glamour in polyester versions of their regional dress, jockeyed for favor as we passed through, singing the praises of the flavor of mengkudu leaves and the anti-oxidant properties of heritage shallots. 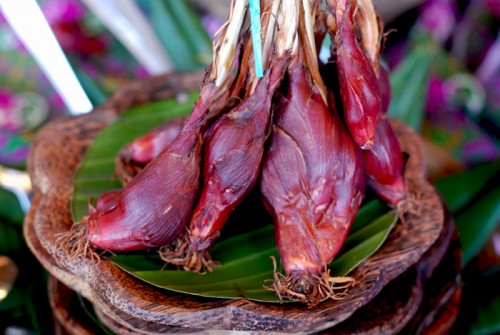 Sadly, the predictions of one of my co-judges proved true: Heritage cooking is in danger of decline. The further from the capital the province lay, the more the cooks drew sustenance and flavor from their environment and their native plants, and the better they honored their culinary traditions. But by the time we sampled the preparations from West Java, the home of the nation’s capital, we were confronted with banal mayonnaise sauces, garnishes that resembled something off a plate at Denny’s, bottled tomato ketchup, wheat flour, and boxed bread crumbs. It was the reverse of the slow food-locavore movement in the United States, where the urban elite have the means to shop from the greenmarkets, and the overstuffed rural families still live on subsidized, refined, processed foods. In Indonesia’s outer provinces, the country folk prepared sustainable, natural fare. The city folk, in a misguided attempt to add razzle dazzle, sourced off supermarket shelves.

No one garnered lower marks (I’m sorry to say by unanimous opinion) than the team of Bali chefs. How and why they were chosen to represent the Prima Donna of the archipelago I’ll leave up to you to figure out. Whatever the reason, the commercial chicken boiled with spices, the tasteless long beans, and the gratuitous addition of grenadine to a medicinal drink, were an embarrassment. 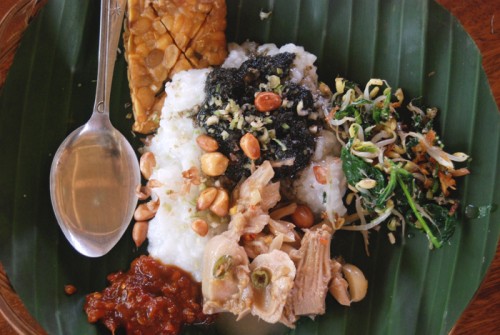 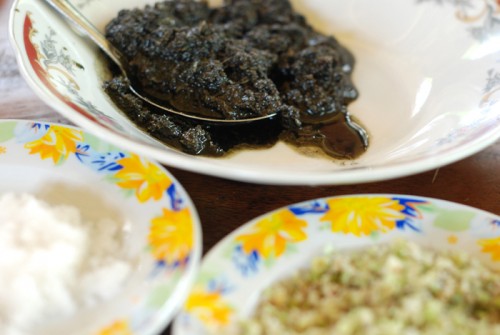 HERE’S WHAT YOU NEED (to make enough of this blackened coconut condiment for about 8 bowls of porridge):

Place the coconut directly over a low flame, turning as needed, until the coconut is burned. (See the photo above). Allow to cool and finely grate the burned coconut.

Using a large stone mortar and pestle, grind the garlic, chili, kencur, and turmeric into a smooth paste. Add the coconut and grind with the spices until they are fully blended in and the coconut also resembles a paste.

In a wok over a small concentric flame, cook the coconut mixture over high heat, stirring constantly with a frying spatula, for about 4 minutes. You want to evaporate the moisture, but you don’t want more burn.

Add the salt and 2 cups of water, and cook over high heat until almost evaporated. Repeat this process with 1 cup water. Your cooking time will be around 20 to 25 minutes for this step. Add about 1/2 cup water, reduce heat to low and allow to simmer, without stirring, until the oil starts to separate from the coconut. Remove from heat before it is too dried out and set aside.

Serve over rice porridge, or on the side.